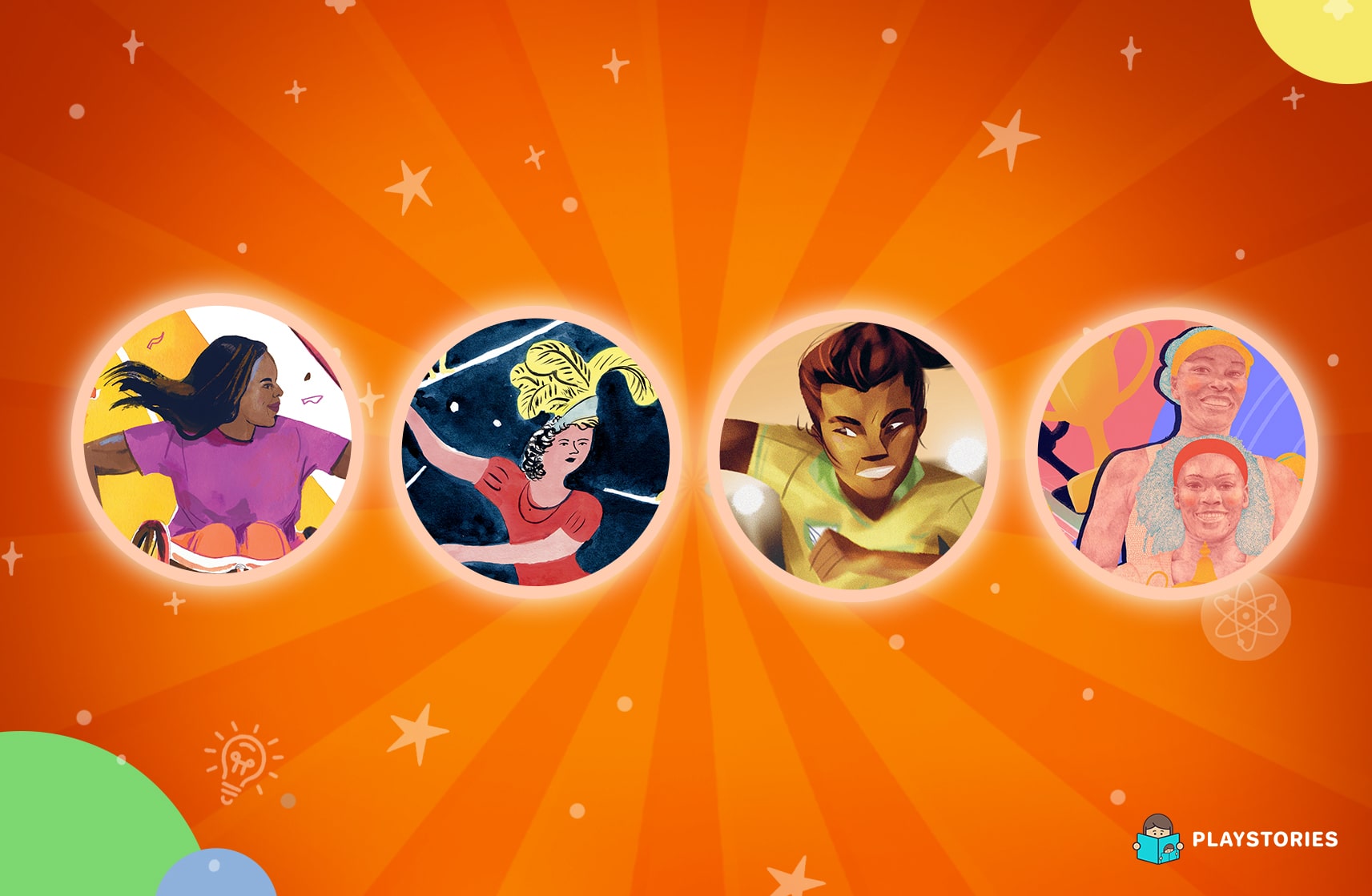 They changed the history of sports with courage, talent, and confidence. Find out more about who are these rebel girls in sports that kids need to know about!

Did you know that the Olympic Games as we know it today started in 1896, but that women were only allowed to participate in the competition in 1900? Historical facts like this reveal how important it is to get to know some of the rebel girls in sport and introduce them to the girls in our lives, showing the little ones that they have as much right as the boys to play the sports they want.

At the Tokyo Olympics, skater Rayssa Leal, also known by her fans as Little Fairy, became the youngest Brazilian athlete to participate in the competition. At only 13 years old at the time of the games, Rayssa inspired children around the world by winning the silver medal on the Women’s Street Skateboarding podium.

Rayssa showed the world how fundamental identification is in encouraging children to play sports.

The importance of rebel girls in sports for children

For girls to be able to identify with a female athlete is very important, according to a study carried out with 400 children and published in Science Magazine, from the age of 6, 30% of girls begin to feel less intelligent and talented than boys.

For this reason, getting to know more about these rebel girls in sport is so relevant to encourage the contact of the little ones with different sports.

After all, whether for boys or girls, for typical or atypical children, the practice of sports in childhood provides benefits that go far beyond encouraging a healthy routine. That’s because, while they have fun playing football, basketball, swimming, and judo, among many other activities, children also improve their mental health, their socio-emotional skills, help with socializing with other children, and prepare them for the “real world”, according to IMG Academy.

Aída dos Santos is one of the great names in Brazilian sport. Born in 1937, Aída is the youngest of six children and had a very difficult childhood. It was there that she discovered her talent and found the opportunity for a better future.

In the women’s high jump event, Aída was the state, national, South American, and Pan American champion. In addition, at the 1964 Tokyo Games, she reached the historic milestone of becoming the first Brazilian woman to compete in an Olympic final.

With a bachelor’s degree in Physical Education, Geography, and Pedagogy, Aída took her passion for sports beyond competitions. After retiring as an athlete, she started to dedicate herself to a project that encourages social inclusion through sport.

Anne Wafula Strike is an inspiring rebel girl! Even after contracting polio when she was just two years old, she hasn’t stopped moving and exploring the world around her.

Born in Kenya, Anne became the first person in her family to go to college and it was there that her path in sports began. One of the coaches at the university in the UK where she studied saw her resourcefulness in moving around in a wheelchair and asked if she would like to take a test as a racer.

Since then, Anne has participated in several Paralympics and even won the bronze medal in one of the games she competed in. She has also become a major activist for the rights of people with disabilities.

Although she did not compete in the Olympics, Kathrine Switzer is a rebel girl who made history by fighting and winning her right to participate in the Boston Marathon in 1967. She was the first woman to compete in the marathon which was only allowed to men at the time.

Whether as a marathon runner, journalist, or writer, Kathrine has always fought for women’s rights in sports. In 1972, she was part of the committee that made women’s participation in the Boston Marathon official.

In 2015, Kathrine turned her fight for women’s equality in sports into the 261 Fearless Foundation, which empowers women around the world through running.

For 52 years, Ukrainian gymnast Larisa Latynina has been the only woman athlete to win 9 Olympic gold medals. This achievement is even more impressive, as Larisa participated in only 3 editions of the Olympic Games.

Only in 2016 did the American swimmer Michael Phelps surpass Larisa’s incredible feat when he won 21 medals at the Olympic Games.

Before making history, Larisa faced many challenges like the Second World War. Even though she was born in Ukraine, the gymnast represented the former Soviet Union in Olympic competitions and among the 18 medals she won for the country, 9 of them were gold. 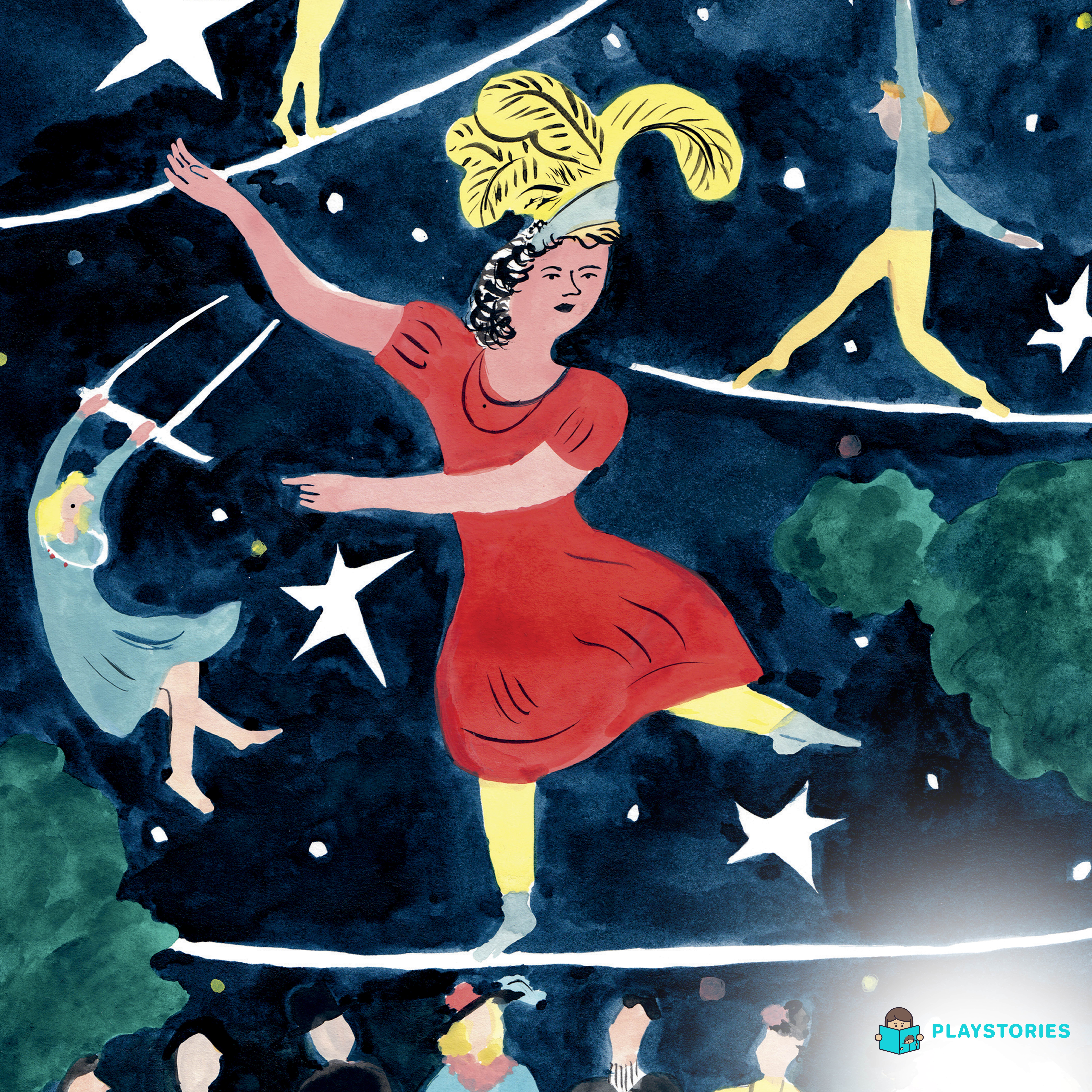 Among the rebel girls in sport, Madame Saqui is a woman that children all over the world certainly need to know about as her example of dedication, courage, and talent is a true inspiration for the little ones. Born in France in the late 1700s, Madame Saqui had a dream to become a tightrope walker. As her father and family were not very supportive of her dream, Madame practiced it in secret.

When she felt safe sharing her talent with her family, Madame Saqui left the whole family delighted! They were so delighted that they decided to set up a circus troupe so that Madame could perform and show her talent.

Among Madame Saqui’s exploits, the most daring was to cross the towers of Notre Dame Cathedral on a tightrope. She was known as the revolutionary rope dancer!

Maria Lenk made history as she was the first South American woman to participate in the Olympic Games. The Brazilian swimmer achieved this feat at just 17 years old when she participated in the 1932 Games, which took place in Los Angeles.

Maria proved to be a real rebel girl because years later she broke world records in the breaststroke event and popularized the butterfly technique.

Her love of swimming pools made Maria Lenk the first woman to be inducted into the International Swimming Hall of Fame. In Brazil, the swimmer’s legacy was honored in 2007 with the inauguration of the Maria Lenk Aquatics Centre, located in Rio de Janeiro. 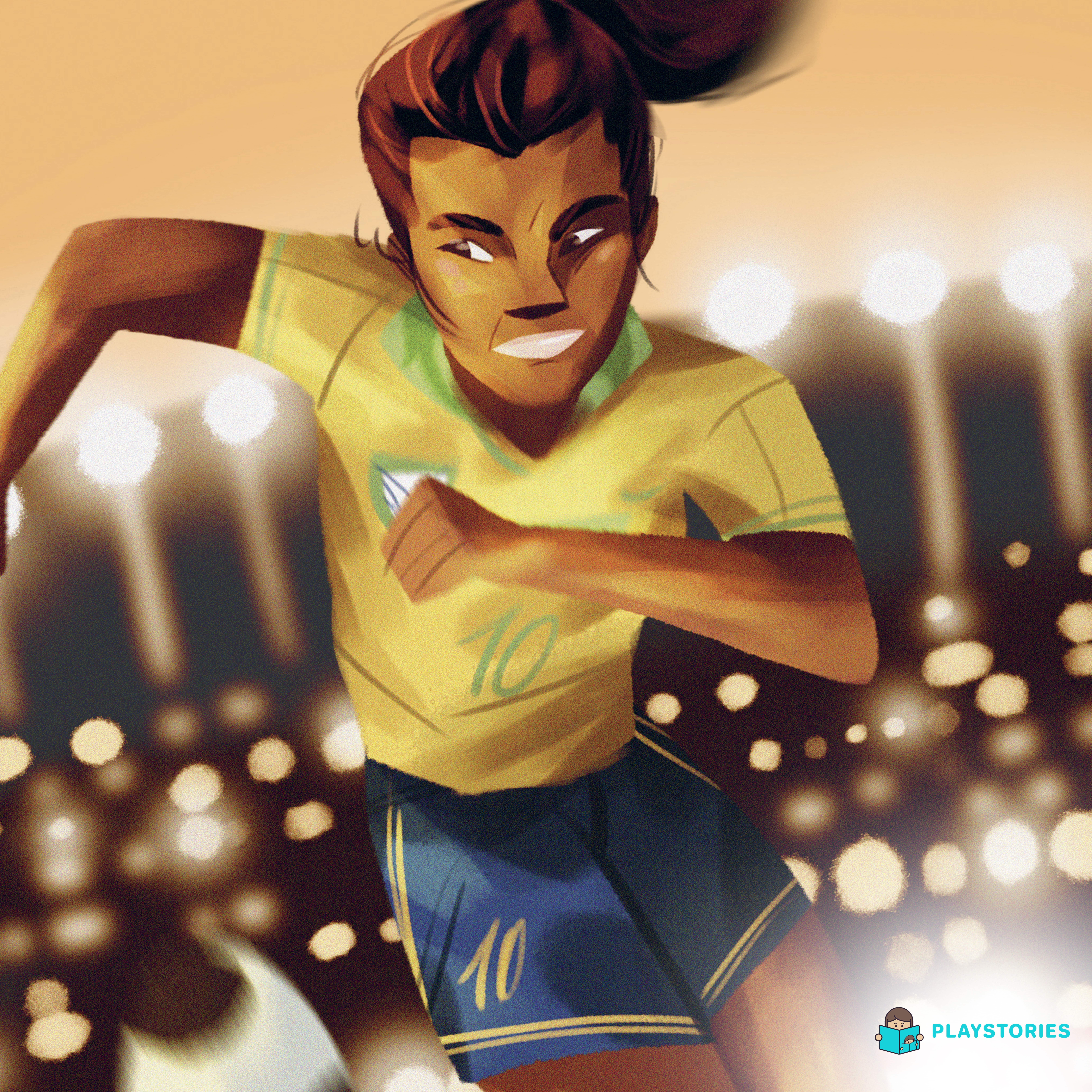 Considered the best soccer player in the world six times by the Fédération Internationale de Football (FIFA), Marta Vieira da Silva is a rebel girl who will inspire little ones not to give up on their dreams.

Marta has always dreamed of playing soccer on a big team, but until that dream came true, she had to be persistent as the boys wouldn’t allow her to join them in games to learn when she was little.

Even so, she trained alone and at the age of 14 her talent was noticed – a very famous coach saw her potential and helped Marta become a great champion. Since then, the player has won several awards and become the greatest goal scorer in the World Cup in the history of women’s soccer.

Gymnast Nadia Comaneci wrote her name in history by becoming the first person to receive a perfect ten at the Olympic Games. This happened in 1976 when she was just 14 years old!

In addition, Nadia also won nine Olympic medals in the Games in which she participated, five of them gold.

Born in Romania, Nadia wanted much more than just being a gymnast, she also wanted to be free. To gain freedom and escape the dictatorship in her country, she walked through a forest at night.

Rayssa Leal, aka “Little Fairy”, is a rebel girl of Brazilian skateboarding. She won the silver medal at the Tokyo Olympics when she was just 13 years old.

Alongside Letícia Bufoni, another great name in Brazilian skateboarding, Rayssa has inspired thousands of children in Brazil and around the world to venture into the world of sports.

In addition to skateboarding, she is also successful on her Instagram profile, where she already has more than six and a half million followers before the Games. Among her posts, Rayssa shares her school routine, competitions, and family moments.

Sisters Serena and Venus Williams are two rebel girls who changed the game for a lot of people. The tennis players, who started training with their father when they were still very young, won several medals in the Olympic Games and the Grand Slams tennis tournaments.

Both Serena, who is considered the number one in the world, and Venus had to overcome many challenges on and off the court to achieve their dreams.

Released in 2021, the film King Richard tells the incredible story of the Williams family in tennis, as well as how Richard Williams, father of Serena and Venus, encouraged and fought for his daughters to conquer the world with their talent.

Sports and empowerment through reading

Whether it’s showing girls the infinite possibilities they have in sports or introducing boys to inspiring examples of women full of talent and courage, knowing the stories of these rebel girls is extremely important for families who want to empower and teach children about equality.

Children’s books are incredible doorways to provide discoveries and learning through play and imagination in a journey filled with knowledge, empowerment, and development 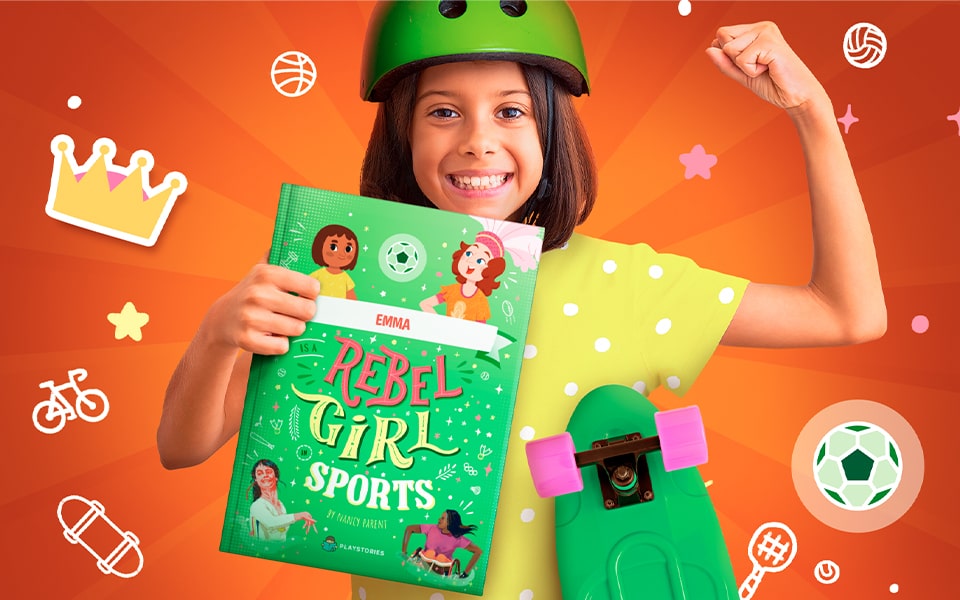 In the personalized book “Rebel Girl In Sports” girls and boys will star in an unforgettable story that will help them learn that their place in sport is wherever they want, in addition to presenting examples of inspiring women who have won in different sports with great talent, dedication and, courage.

Click here to check out all of our amazing stories!

« 10 Rebel Girls In Art To Inspire Kids’ Creativity
How Can Children Learn During Summer Break? »