13 traditional games to have fun and learn 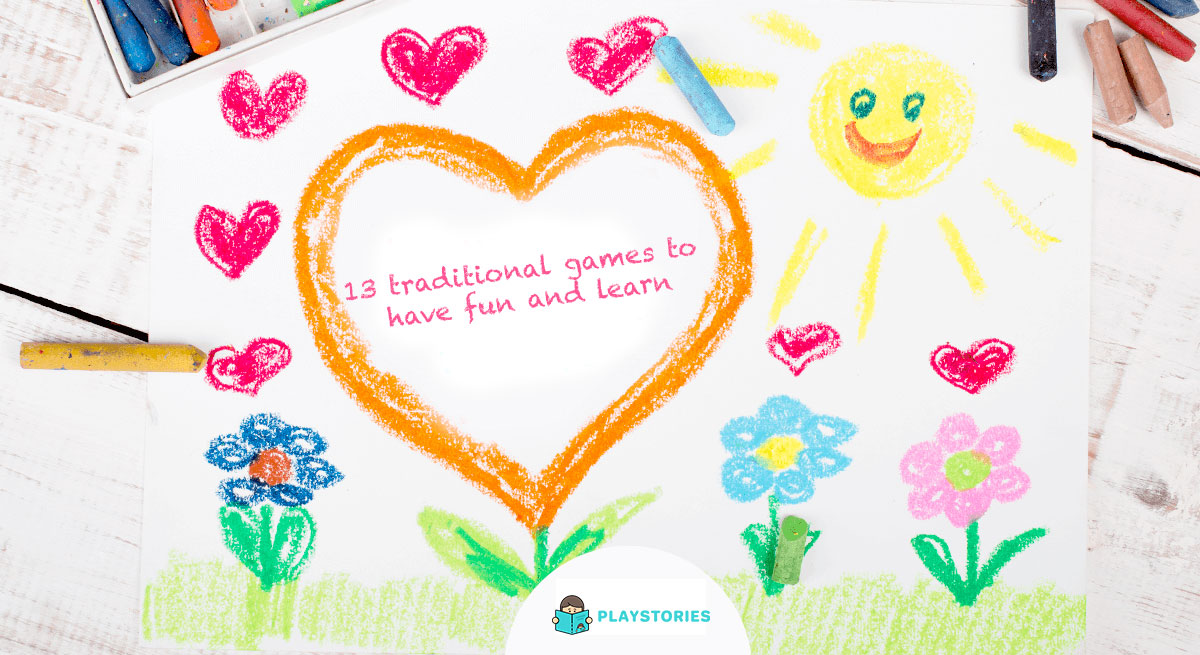 On May 28 we celebrate World Play Day, a date that celebrates the importance of play in childhood, based on Article 31 of the United Nations Convention on the Rights of the Child. More than a right, playing is essential for children’s social, emotional and cognitive development. Traditional games are not just fun, but opportunities to express feelings, practice skills and learn in different ways.

For this reason, in celebration of the International Day of Play we have selected traditional games that have entertained several generations and can still teach a lot to today’s children. They encourage socialization and the development of different skills, such as motor coordination, creativity and communication. All of this without relying on expensive toys or technology. It only takes energy and the will to play!

Below are some suggestions of games that help children develop several skills:

There are so many names for this game: kite, parrot, square, stingray … It appeared in China thousands of years ago, but there was a way of signaling, since the kite’s drawings or movements allowed to send messages to those who saw them from afar.

There are different ways to make a kite, and the necessary material comes down to a few sticks of wood, paper and thread. The manufacture of kites and rabiolas helps the child to train fine motor coordination, and unleash creativity to create the most beautiful and colorful kites.

Children love to play with modeling clay, because it is fun to be able to create anything you want with your own hands. Developing touch, little ones can learn about shapes and colors, mixing the clay to try new tones. Children of any age can use their imagination to create objects, animals, fruits and many other shapes. The adult can encourage giving ideas to use rolls, molds, stamps and any other object that the child can use to interact with the clay.

Since a very young age, many children love to draw and color, either on paper or even on the walls of the house (to the parents’ despair!). At different ages, it is possible to encourage the child to explore different materials, such as colored pencils, pens, crayons, gouache paint and even some unexpected ones, such as clay and sand. In addition to being able to express themselves in the drawings, children learn the right “pencil-grip”, that is, the use of the thumb and index fingers to hold the pencil, which will be important in the future to learn to write.

This group game can be played with children of different ages. Those who do not yet know how to write can sit in a circle: the first one begins to tell a story, and each child tells another piece in sequence. This can also be done using drawings: one child begins to draw a story and the others complete the drawing one at a time, until they reach the end of the story.

Children who already know how to read can each write the beginning of a story on a piece of paper, and pass the paper around for the others to continue, until he has passed the whole wheel and the stories are complete.

This traditional game is more fun with music and only a few chairs are needed (one less than the number of children in the group).

With the chairs in a circle, the music plays and the participants walk around them. When the music stops, everyone sits down. Whoever is left without a chait, leaves the circle and can take care of the music on the next turn. On each round a chair is taken from the circle, and the winner will be the one who can sit last.

No smartphones, expensive toys or tablets: all you need is a ring to play. Or, in fact, any small object that can be used instead.

One hides the ring in the middle of his hands. The others are in a circle with their hands together in a praying-like motion, and the child with the ring pretends to lay off the ring in each of them, without showing. Whoever finds out who the ring is with wins and passes the next round.

This game everyone knows: one child is blindfolded while the others hide. After finishing counting, the child goes looking for his colleagues. When he meets someone, the two run off to reach the base. If the hidden loses, he counts in the next round.

Hopscotch is a tradicional game that involves several abilities. With a crayon, the child draws the hopscotch on the floor with the numbers up to 10. He can also decorate and color it.

After that, each child leaves a stone in a number and starts jumping, alternating the two feet and one foot, without stepping on the number with the stone. This develops balance, strength and the spatial notion.

These beautiful colored glass balls have survived through time. When playing marbles, they must be thrown in a circle made on the floor. By releasing a ball with the thumb, each player’s goal is to hit opponents’ balls to throw them out of the circle. The prize may be to keep the other player’s marbles.

There are several ways to play with rope, almost always following a song that rhymes andt gives the coordinates for those who are jumping.

Younger children can also. For Snake game, the rope stays on the ground. Have one person hold it at each end and wave it gently along the ground like a slithering snake, while other players attempt to jump over it. Take turns being the jumper and the snake-mover.

A child chooses a word and, on a sheet of paper, draws the gallows and a dash for each letter. Each player kicks a letter. If it is in the word, the child writes the letter in the correct place. If the letter does not appear in the word, the child draws a body part on the gallows. If the whole body is drawn before the word is unveiled, the group loses and the person who chose the word wins.

This game combines music and memory. One child peaks a word, and the other one has to remember songs that have the word in the lyrics. The round continues until someone can’t remember any more songs, so that person will think of a new word for the next round.

To play miming, children can be divided into two teams. Each team writes on pieces of paper words like names of animals, drawings, famous people, or even actions like “playing football”. A participant draws a role and has to stage the word for his own team to guess, with a time limit. If you can’t, it’s a point for the other team. The team that scores the most points wins.

Read more: What is the right age to learn to read?

These traditional games are just a few ideas on how to encourage children to play freely, without depending on specific spaces or toys.

Play is the main form of expression for children and one of the first ways for them to interact with the world. That is why traditional games are so essential for child development.

Even for adults, playing has many benefits, as a way of relieving stress, freeing the mind and stimulating creativity.

Have you played with your kid today?

The importance of reading for the Alpha Generation »

6 Replies to “13 traditional games to have fun and learn”