8 Ways To Teach The Alphabet In a Playful Way 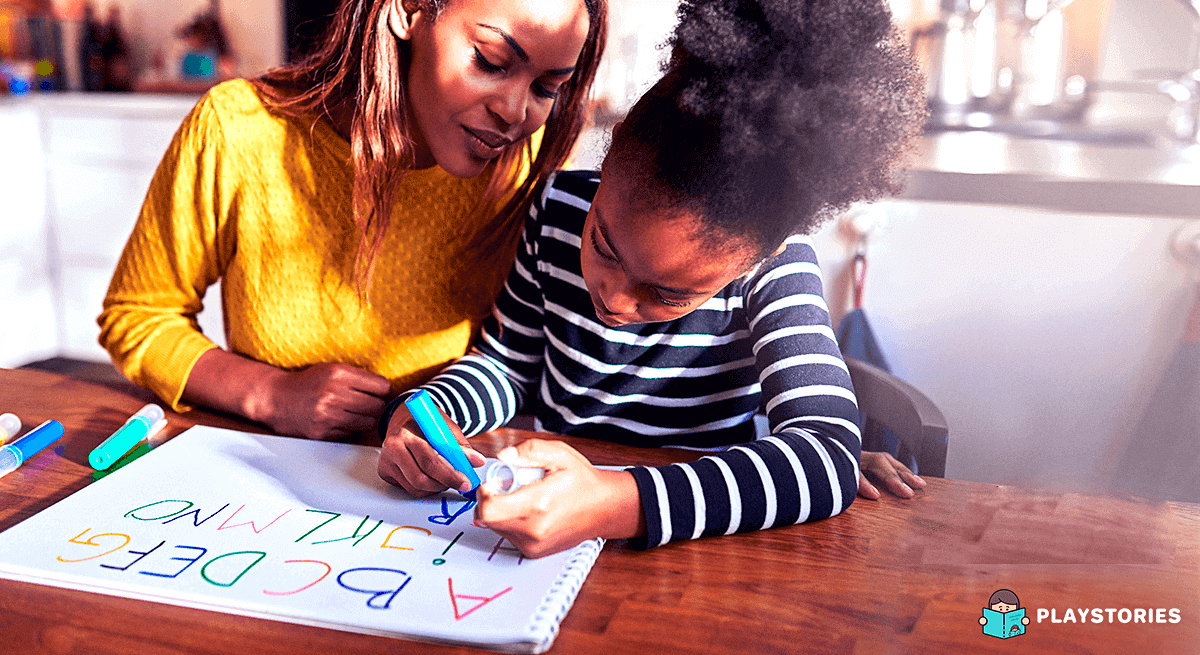 Starting to recognize letters is the first step in learning to read and write. It is common for children to show curiosity about the letters that form their name and their favorite words, such as the names of animals, colors, and even their parents. Some learn the alphabet very quickly, while for others learning depends on more stimuli and repetition. What helps in this process is knowing how to teach the alphabet in a playful and fun way!

When do children start learning the alphabet?

Most children begin to recognize some letters between the ages of 2 and 3, and by the age of 5, they can almost identify the complete alphabet. This means that it is possible to start teaching the alphabet as early as age two, but the child should not be expected to have a complete mastery for some time.

It’s also important to remember not to get concerned if your  child takes time to understand and become interested in letters. The family does not have to play the role of the school at this early stage. However, parents also have an important role and can offer children opportunities that favor literacy from an early age.

There are many ways to present lyrics to a child. At each age, learning takes place in a different way, which is why stimuli must also change over time.

Younger children are mainly attracted by visual elements and their daily lives. Therefore,it is possible to start stimulating them by teaching the letters of colors and animals, for example. In addition, storytelling and stimulating interest in books is an important habit for children to have, so exposing them from an early age is helpful.

Encouraging children to write their names is usually one of the first steps to familiarize themselves with the alphabet. Parents can encourage this in several ways: hanging letters of the alphabet forming the name on the bedroom door, asking the child to sign the name on the drawing they made, or \placing letter magnets on the fridge for them to play with. In one hour, the child will understand that these letters combined, represent their name, and take that learning to other words.

Phases of literacy at each age

Each child is unique and goes through their own developmental process. Even so, at each age it is common for the little ones to present some learning milestones related to reading and writing.

0 to 3 years old: At this age, the child shows curiosity to hear stories, so it is important to encourage a taste for books and the habit of reading. Children like repetition, so it is common to always ask for their favorite stories over and over again. They begin to show interest in writing their name and even imitate writing in their drawings.

4 to 5 years: In this phase, the child can already write his name and recognize this set of letters as a word. It is common for them to start writing words and short sentences in their drawings. In addition, they also like to hear longer stories and tell the ones they know. They recite rhymes, speak and sing favorite songs from memory.

6 to 7 years old: In this age group, many children already manage to write phrases and small texts that make sense. Spelling errors are common and natural at this stage, as the correct spelling is established over time.

Tips for teaching the alphabet in a playful way

We have gathered 8 ideas on how to teach the alphabet in a playful and fun way for your little one:

Singing alphabet songs to your child is one of the most common ways of introducing lyrics, both in the mother tongue and a second language. Rhythm and repetition are factors that help to memorize the order of the letters in the alphabet, facilitating the identification of each one separately.

Books showing the alphabet are a great way to encourage contact with letters from an early age. The images and visual stimuli next to the text encourage the child to associate the letters with the words and things he or she already knows.

The movable alphabet is a name given to letters usually made of plastic, which are a widely used resource in schools. It is also possible to do activities at home, and you don’t even have to buy the plastic letters: just create letters on cardboard or other resistant material.

One possible activity is to write the child’s name on a piece of paper and ask him to put his name right next to it with the movable alphabet. It is also worth involving visual aids, such as images, or even the objects themselves. For example, ask the child to show  their favorite toy and after that, write the word with the letters.

Many parents are wary about encouraging their children to use digital devices, such as cell phones and tablets. In the literacy phase, technology can be an ally through educational applications.

A great activity to start writing training is the alphabet sandbox. This activity can be used for different motor training. To do the activity, it’s necessary to have letters for each letter and a sandbox. The child looks at the letter, running his finger over the outline of the letter, and then traces the letter in the sand.

This is a tactile and visual way to help children learn the alphabet. To make the letters, cut out the shapes of the letters in fine sandpaper and stick them on the small cards. It is also good to make a small indication with an arrow, showing the initial point and direction of the movement. See an example in the video:

Those who are learning to read begin to notice the presence of words in the world around them, whether it’s in advertisements, labels, newspapers, or magazines. Encouraging this perception is a way to promote continuous learning!

An activity that can be done anywhere is the search for words in magazines and newspapers. The adult can suggest to the child to search and cut out different words, for example, that start with a certain letter, or that is formed by a certain number of letters, according to what the child has already learned.

Slightly older children can search for plural words, words with a certain amount of syllables, words in the augmentative or diminutive, etc. This exercises reasoning and promotes contact with different words, which contributes to the construction of vocabulary.

This game is great to play with a group of children, at home with siblings and friends, or school. In a shoebox, place letters of the movable alphabet (made of plastic, wood, or even paper).

With the kids around, turn on the music and ask them to pass the box from hand to hand. When the music stops, the child takes a letter from the box and says a word that starts with it. The adult may ask for an animal, color, country name, etc. If the child does not remember a word, encourage friends to contribute.

Which child doesn’t love to play with clay? There are already some plasticine kits that help you learn the alphabet. But the idea is simple and can be done at home!

On bond paper or thicker, draw each of the letters. The child will use the clay to model the letters on the paper. You can also encourage them to create animals or objects that start with that letter.

With these tips, learning the alphabet will be a walk in the park. This is important for learning to happen naturally and continuously. So, soon the child will start to read and write without even realizing how they learned all of this!

Learn more: How To Encourage Kids To Read? Here Are 8 Effective Way To Motivate Your Child To Read

« Literacy: At What Age Should a Child Learn to Read?
Little Red Riding Hood, the Personalized Book »