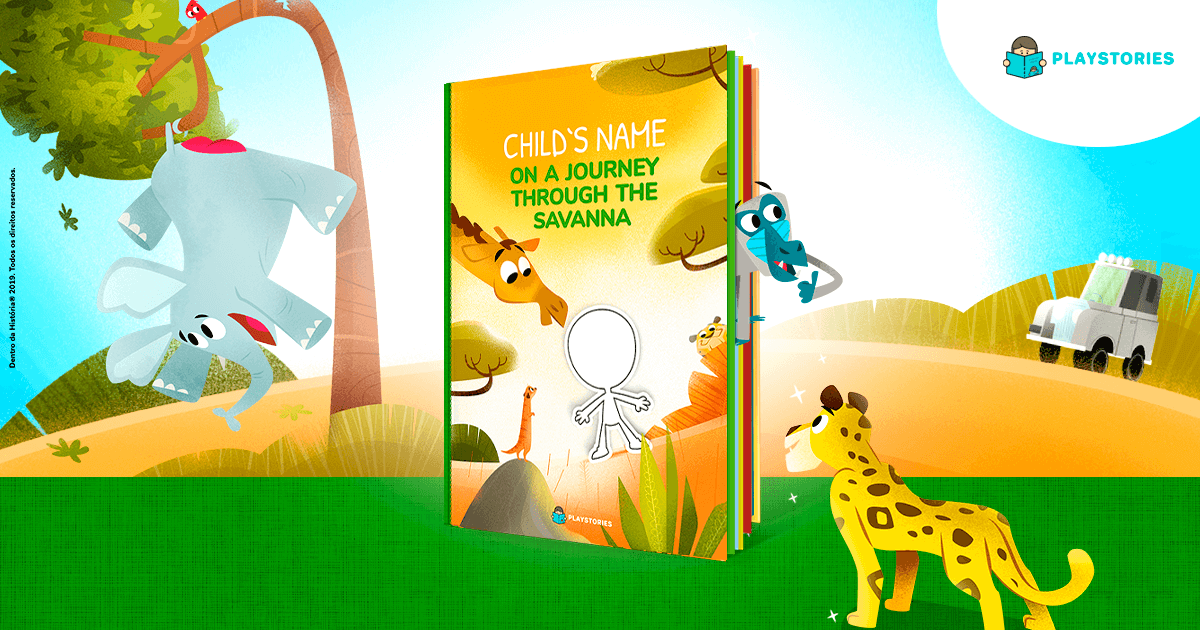 In this series ‘Meet the Animals’, discover interesting features and facts about the species of animals in the Savanna.

In the immense African Savanna resides many species of animals. The lion is the king of the jungle, the leopard is one of the fastest mammals in the world, the giraffe reaches the top of the trees and the rhino weighs tons.

In the personalized book ‘On a Journey Through the Savanna’, children are introduced to different species, learning their characteristics and ways of life in a playful and fun way.

The crocodile is the largest living reptile alive today. They like to live in still waters, which offer the possibility of camouflage, and make sandy shores, muddy river banks, and saltwater mangroves their home.

Crocodiles are very fast swimmers, which helps them to catch their prey. They can swim at speeds of up to 20 miles an hour and can hold their breath underwater for about an hour. In addition to having very strong jaws, crocodiles also have very sharp teeth. These animals can even hear their babies moving around inside the eggs!

Hyenas are one of the most common animals in the African savannas. They are carnivorous mammals with a great capacity for adaptation. They live in groups of 40 to 100 members. Hyenas have a matriarchal society, that is, the older female usually leads the pack. They are very smart animals that make no sound to communicate, always using body language to communicate with other members of their pack.

The lion is the second-largest cat in the world, second only to the Siberian tiger. Known as the king of the jungle, their only predator is the human being. They live in the savannas in southern Sahara, Africa, and India.

Lions feed on animals such as zebras, buffalos, and even elephants. Lions stand between 3.5 and 4 feet tall at the shoulder. Males grow to lengths of 10 feet and have a 2 to 3 foot tail. They weigh from 330 to 550 pounds, and liveup to 20 years! Another interesting factis that a lion’s roar can be heard up to 5 miles away.

Giraffes are the tallest mammals in the world, thanks to their tall legs and long necks. They are animals from the semi-arid African Savanna and also from open forests, which have trees and many tall shrubs at their disposal. These animals only sleep about twenty minutes a day! This is because staying awake most of the time allows the giraffe to be in constant alert for possible predatory attacks.

Meerkats are mammalian animals that live in flocks and inhabit some of the most inhospitable environments on Earth. At just 12 inches tall, they are brave enough to face snakes headon. Their 6 to 8 inch serves as a support for the meerkat to balance itself when standing up.

These animals feed on beetles, centipedes, earthworms, crickets, small mammals, birds, eggs, and even scorpions – meerkats are immune to the venom of these animals.

Did you know that elephants can spend up to 16 hours eating? They can eat an average of 300 pounds of food per day, not surprising considering that they can weigh 14,000 pounds.

Another curious fact is that adult elephants always sleep on their feet, a way to protect themselves from predators. They like to take mud baths to cool off and also because the mud removes parasites. Its long trunk is used both for drinking water and for other occasions, such as scratching their eyes and ears, and also for picking up or throwing objects.

The size of the rhinos can make it appear that they are carnivorous animals, but in reality, their food consists of leaves, fruits, grass, stems, and branches. This Savanna animal is one of the most endangered species on the planet. It is estimated that only 29,000 rhinos remain in the wild, compared with 500,000 that existed in the early 20th century. One reason for this is hunting for the sale of their horns, which measure up to 25 inches.

Does your little one like to learn about animals?

Although many of these savanna animals are not found in America, children can use Playstories’ books to be part of an adventure and learn about these incredible animals!

Coming soon on our website: don’t miss out on the opportunity to get to know our NEW coloring book “Coloring The Animals”. Create the personalized book and encourage learning in a fun way!

« Curiosities About Five Species of Dinosaurs | Meet the Animals Series
Personalized Coloring Book For Kids: Download At Home For Free! »