Curiosities About Animals That Live on Ice | Meet the Animals Series 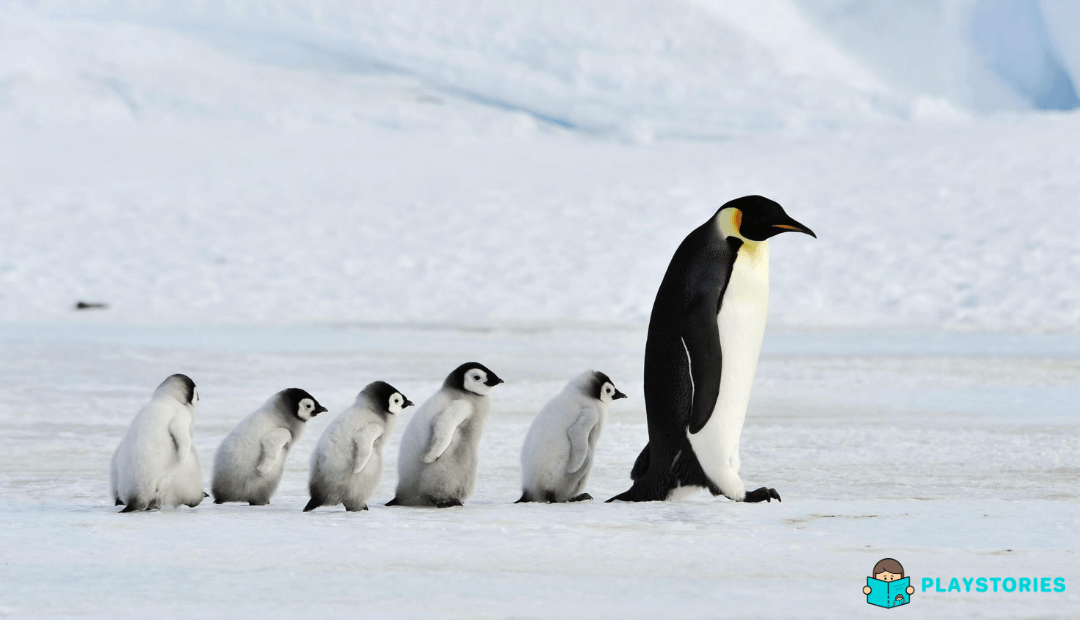 In the series ‘Meet the Animals,’ discover the characteristics of the species that live in very cold environments, like in snow and ice.

Why is the polar bear white? What do penguins eat? How do animals live in the cold? If you have heard these questions from children, here’s your chance to find out the answers.

In the series ‘Meet the Animals’, you will see fun facts about the animals that live on the ice, and find out how they can survive very cold temperatures.

How do animals live on ice?

Several species of animals live in the north and south poles of the planet, regions with extremely cold temperatures, which to us seem like an impossible environment to survive.

These animals have characteristics that allowed them to adapt to the cold, such as fur, a higher level of body fat, and even feathers that help them maintain their temperature.

In the personalized book ‘A Journey Through Ice’, children are introduced to various animals, like penguins, polar bears, orca whales, seals, and musk oxen in a fun and playful way.

Learn more about these unique animals and share all of the amazing information with your little ones! Lets go!

Penguins are sea birds that do not fly. They can be found in Antarctica, New Zealand, southern Africa, Australia, and South America. There are different species of penguins. However, they have many characteristics in common.

All penguin species have a white chest with a black back and head. They have four fingers on each foot, joined by a membrane, which helps them to swim faster.

Penguins have a very small type of feather that covers their entire body, which helps them to swim and it protects them from very low polar temperatures. In addition to the feathers, penguins have a thick layer of body fat that serves as thermal insulation.

Penguins are good hunters and feed on crustaceans, mollusks, fish, and small marine animals. They are also excellent swimmers and spend most of their lives in the water.

Orcas are mammals that live mainly in cold-water seas, but can also be found in equatorial waters. They often swim long distances: a group was found traveling over 3,000 miles from Alaska to California.

According to scientific classification, the orca is considered a dolphin, and not a whale as we might assume. However, whales and dolphins are part of the same order, so the expression “orca whale” is not wrong.

Orcas are easily recognized by their black and white colors. These animals that live on ice have a thick layer of fat that protects them from low temperatures and can weigh up to 12,000 lbs.

They eat everything: including fish, octopuses, squids, birds, and mammals such as seals and sea lions. They eat an average of 250 pounds per day, and more than half of their time is spent looking for food. They are at the top of the food chain in their environments, so they have no natural predators – only humans.

Like other marine mammals, orcas need to rise to the surface to breathe. Orcas in their natural habitats live in groups of up to 40 animals, and can even live to be 80 years old.

Polar bears are animals that live in the Arctic region, the famous North Pole. It is the largest of all bear species in the world, being 10 feet in length and weighing up to 1,700 pounds.

Polar bears are famous for their white fur. This is an evolutionary characteristic, which favored its adaptation to the environment, allowing the bear to camouflage itself in the snow. However, what few people know is that the polar bears’ skin is actually black.

Another important feature is its large amount of fat, which protects them from the cold weather. During summer, when the ice melts, bears go a long time without food, surviving thanks to their fat reserves.

Polar bears are currently classified as vulnerable on the International Union for Conservation of Nature and Natural Resources (IUCN) red list. They are extremely dependent on ice to survive, so changes in the Earth’s temperature could cause the species to cease to exist in about 100 years.

Seals are mammalian animals in the same group as sea lions and walruses. They are found mainly in the waters of the Arctic and Antarctica, but each species has its specific habitat. The common seal inhabits the temperate and polar waters of the Northern Hemisphere, while the crab seal is widely seen in the Antarctic region. There are even species, such as monk seals, that reside in warm regions.

To control body temperature they need to be covered with fur and have a layer of fat. These animals weigh up to 298 pounds, and have a short neck and a hydrodynamic body, which helps them swim.

An interesting thing about seals is that they do not have ears. They only have auditory slits, which are “holes” behind the eyes that lead to the inside of the ear. It may seem like a minor detail, but it helps seals to swim faster!

Some species of seals can dive at great depths. The hooded seal can dive up to 1,300 feet and be submerged for more than 50 minutes.

The musk ox is one of the most curious animals that live on ice. They are big, furry, and live in the Arctic. They belong to the ram and the goat family. The name “musk” refers to the strong odor given off by males to attract females.

This animal inhabits the coldest areas of Canada, Alaska, and Greenland. It is herbivorous and feeds on grass and other plants, while reaching a height of more than 5 feet tall and weighing up to 800 pounds.

The musk ox fur is dark brown and very long, almost dragging on the ground. Eskimos use their fur to make clothes and protect themselves from the cold.

Underneath the fur, there is a thick layer of wool, which helps to maintain body temperature. Older musk oxen have horns that can reach 24 inches, which they use as weapons when they feel threatened.

Questions to reflect on

Once you know the characteristics of animals that live on ice, you can ask your little ones these questions to encourage reflection and learning:

Hint: There are different ways to maintain body temperature, and the main ones that we saw in the animals above are: fur, fat layer, and impermeable feathers.

Hint: No. Of the species above, some inhabit the Arctic (North Pole), Antarctica (South Pole), or even cooler regions on different continents, such as Africa and South America.

Hint: It depends! Some species are herbivorous, such as the musk ox, while others are carnivorous, such as seals. Most carnivorous animals in this region find their food in the ocean, which consists mainly of fish. Some animals are at the top of the food chain, like the polar bear and the orca, which means that they feed on other animals and have no predators.

« Personalized Coloring Book For Kids: Download At Home For Free!
Dinosaur Costume Hat: How to Make a Jurassic Accessory. »